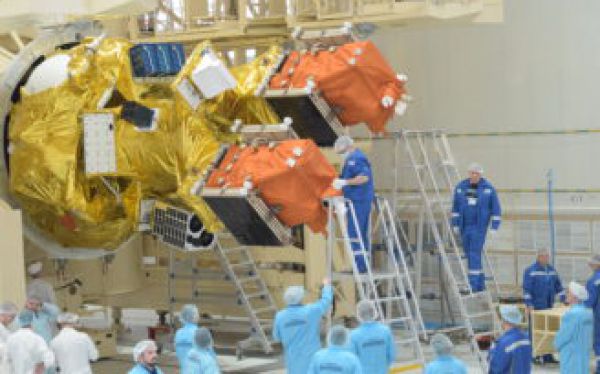 On December 20, assembling of the Soyuz-2.1a space head module (SHM) with the Russian Kanopus-V-5/6 satellites and foreign piggyback smallsats was completed in the Launch Vehicle Assembly, Integration & Test Building of the Vostochny Cosmodrome with participation of Glavkosmos and GK Launch Services specialists.

Total 26 satellites from Japan, the USA, Germany, Spain, and South Africa will be launched under the contracts of Glavkosmos and GK Launch Services.

15 out of those have been contracted by GK Launch Services. 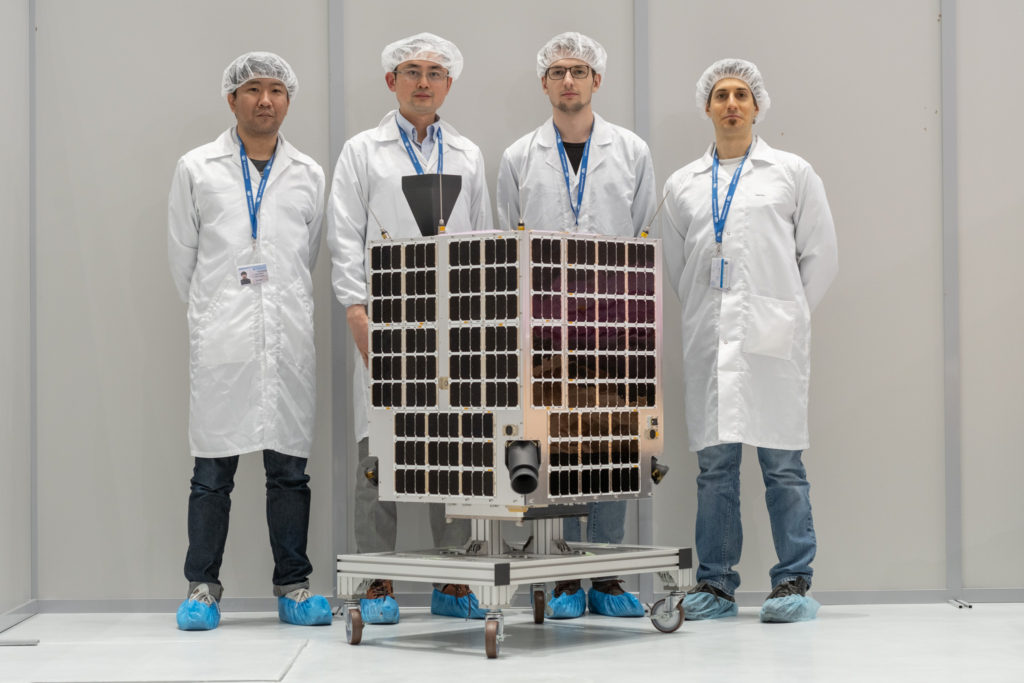 GRUS, designed and assembled by Axelspace, is the next-generation microsatellite for AxelGlobe constellation, the Earth observation infrastructure to cover the Globe on a daily basis. GRUS has commercially strong telescopes to capture images at a resolution of 2.5m with a swath of 60km, all within a compact mass of roughly 100kg and designed to operate for at least 5 years.

The Flock 3k Payload consisting of twelve 3U Dove CubeSats was designed and built by Planet Labs Inc. (“Planet”), headquartered in San Francisco, USA. Flock 3k is Planet’s latest fleet of commercial, Earth Imaging satellites, which will be joining Planet’s currently on-orbit fleet of 100+ Dove satellites imaging the Earth at unprecedented scale and frequency. The Flock 3k satellites have a mass of 5 kg each and have an expected life time of up to three years. Planet’s commercial satellite imagery and added value products are used to serve customers in government, industry, non-profits, and academia.

Part of the payloads are provided by ISL (Innovative Space Logistics), the leading small satellite launch services operator of ISIS – Innovative Solutions In Space from the Delft, The Netherlands. ISL’s ISILaunch24 campaign is arranged on the Soyuz rocket under contract with GK Launch Services and consists of 14 satellites, including twelve 3U Dove CubeSats. The satellites are accommodated in ISIS’ well-known QuadPack deployers, controlled by an ISIS flight sequencer, similar to previous ISILaunch campaigns on Soyuz. With more than 50 satellites already launched on Soyuz in the past, part of over ISL’s track record of more than 300 satellites brought to orbit in total, ISL is pleased to continue its cooperation with GK on launching with Soyuz in future, with capacity on launches planned through 2021. 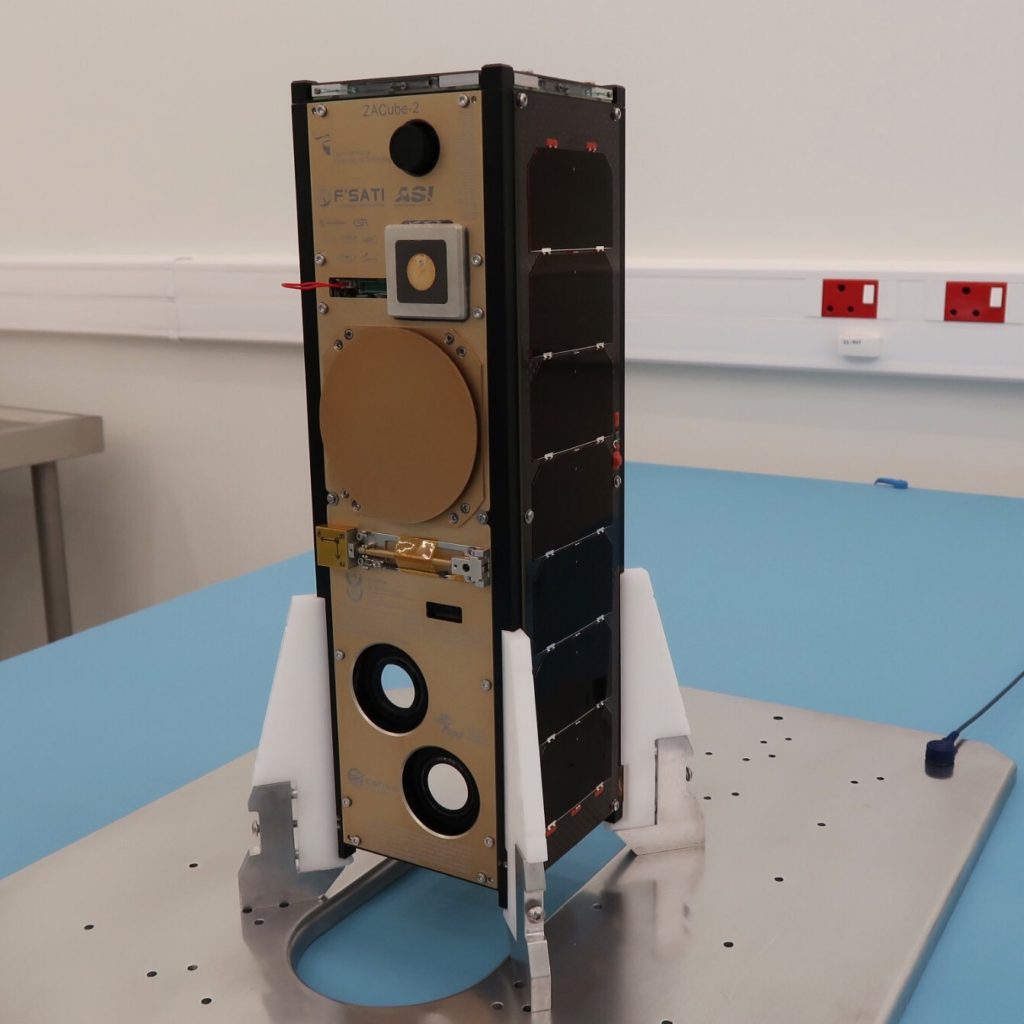 The spacecraft ZACube-2, created by experts of the Cape Peninsula University of Technological (CPUT) and French South African Institute of Technology (F’SATI) in South Africa, is a technology demonstrator. Its main payload, is a receiver for the automatic identification of ships (AIS). Additionally, the spacecraft has near-infrared imaging equipment for detecting forest fires. The spacecraft’s weight is about 3.5 kg with a lifetime in orbit of approximately 2 years.

The spacecraft Lume-1 is a 2-unit Cubesat, developed by the University of Vigo, Spain. Lume-1 will be used as the space segment and communication platform for the FIRE–RS system for early detection of natural disasters, in particular natural fires. The device is also a demonstrator of a number of new developments of the University of Vigo. The estimated service life time of the 2.5 kg spacecraft is 2 years.

The ECM SmallSat Cluster of eleven international CubeSats is delivered by the European smallsat integrator ECM Launch Services (Germany). The satellites will be launched as an auxiliary payload through the cluster mission contract with JSC Glavkosmos and will be accommodated into 12U ECM launch deployers developed by the integrator. After this launch the total number of microsats and CubeSats contracted and integrated by ECM Launch Services for the Soyuz-2 missions will reach 54. 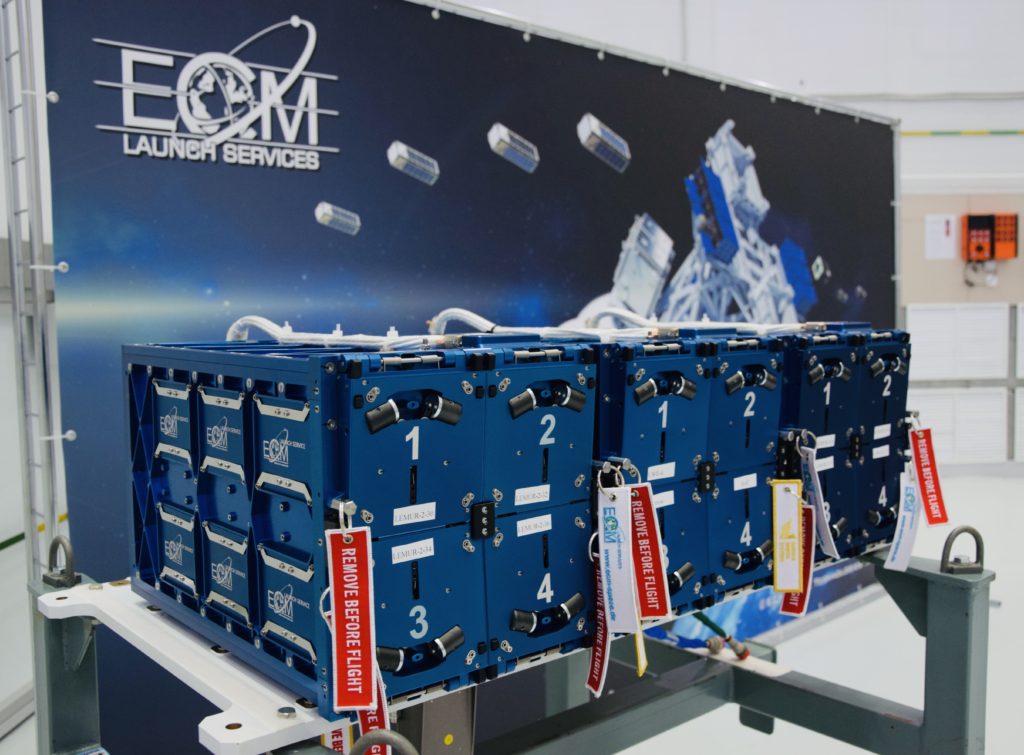 The D-Star ONE (iSat) and D-Star ONE (Sparrow) satellites are built on the basis of the second generation of the 3U CubeSat platform developed by German Orbital Systems GmbH, a private company from Germany. The satellites will demonstrate a number of new technologies, especially, in the field of services for the radio amateur community. Each satellite is also equipped with a new ADS-B receiver, developed in-house, that will be qualified in space.

The UWE-4 satellite is a 1U CubeSat built by Würzburg University (Germany). It is designed to demonstrate an electric propulsion system and serves as a multidisciplinaty educational project of the university.