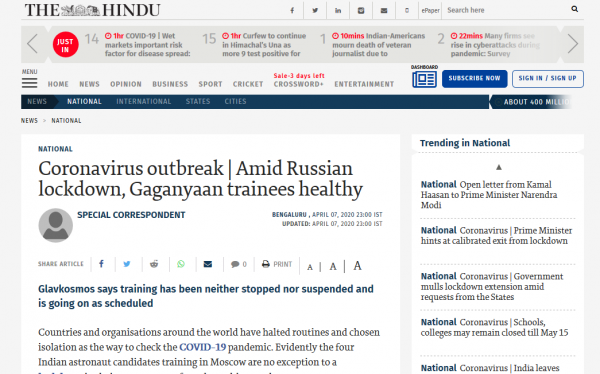 Countries and organisations around the world have halted routines and chosen isolation as the way to check the COVID-19 pandemic. Evidently the four Indian astronaut candidates training in Moscow are no exception to a lockdown in their own spaces — for at least this month.

While space missions have been quietly suspended and deferred in India and everywhere else.

In an e-mailed reply to The Hindu, Russian space company Glavkosmos JSC (Joint Stock Company) quoted its Director General Dmitry Loskutov as saying that isolation applied to the Indian astronaut trainees as employees across Moscow switched to tele-work from March 30 (March 28 in the reply to The Hindu, - Glavkosmos Press Service) up to the end of April.

“Lockdown has strongly been recommended for the astronaut-elects, as well as for the personnel” of the Gagarin Research & Test Cosmonaut Training Center (GCTC), Mr. Loskutov said.

Glavkosmos stressed that the training has been neither stopped nor suspended and is going on as scheduled. They are healthy and have been working and exercising on their own for the last week or so at the GCTC.

The four candidates are pilots in the Indian Air Force. They started their year-long general training programme in early February. The finalist/s will circle Earth for a few days as part of the first Indian human space mission, Gaganyaan, which is planned for the year 2022.

The Indian Space Research Organisation (ISRO) had not replied to a similar query at the time of going to print.

The candidates are healthy and have completed 25% of the programme and continue working according to their training plan, Mr. Loskutov said.

The astronaut-elects are preparing independently for next week’s theory exam on the flight theory of manned spacecraft.

Last week they passed the exam to gauge how much they knew the onboard systems of the manned spacecraft.

They will be taught skills required during any abnormal landing of the spaceship besides a part that is specific to handling Gaganyaan spacecraft.