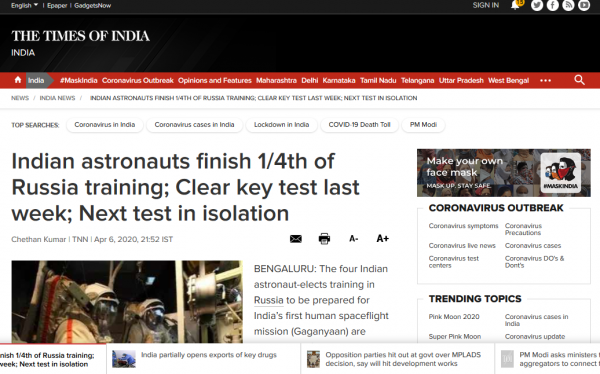 Dmitry Loskutov, director general, Glavkosmos, which has an agreement with Isro for astronaut training, told TOI: “The four astronaut-elects are in good health. The highly professional medical experts of GCTC are constantly observing them.”

He added that beginning from March 26, Glavkosmos, a subsidiary of Russian space agency Roscosmos, has set up a Pandemic Response Group to prevent the risk of Covid-19 spread. This group’s tasks include monitoring the health status of employees and developing measures to limit the negative effect of the spread of coronavirus on the company's business activities.

The Russian authorities had introduced a lockdown for citizens from March 28 until the end of April to reduce the risks of the coronavirus spread over the country, and Glavkosmos said all precautions are being taken in line with these instructions.

“The decision to resume the full-scale training will be taken after a thorough observation of the epidemic situation in the country, but the classes will not be resumed before April 30,” he added.