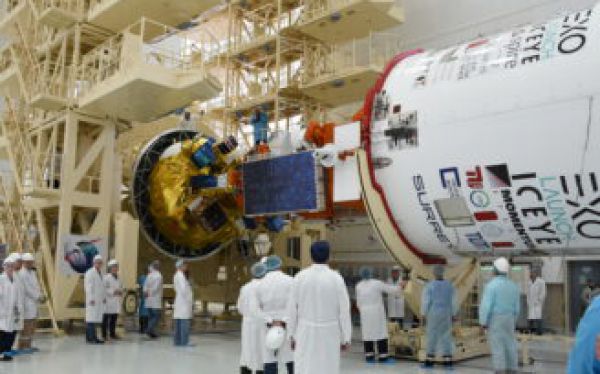 On June 27, integration of the Upper Composite of Soyuz-2.1b launch vehicle comprised of the Fregat upper stage, Russian satellite Meteor-M 2-2 and 32 secondary payload spacecraft was completed at the Vostochny Cosmodrome in the LV Assembly Integration and Test Building with participation of specialists from JSC Glavkosmos, JSC GK Launch Services and foreign customers.

Under the contracts between the German company Exolaunch GmbH and JSC Glavkosmos 28 satellites will be launched in the interests of Germany, France, USA, Israel, United Kingdom, Sweden, Finland, Thailand, Ecuador, Czech Republic and Estonia.

In line with the contract between JSC GK Launch Services and British SSTL a technology demonstration satellite will be launched.

The cluster of small-sized spacecraft of Exolaunch GmbH company, the leading provider of turnkey solutions on technical integration and launch and producer of separation systems for small-sized spacecraft, consists of 25 SC of the popular сubesat format with dimensions ranging from 0.25U to 16U, 2 commercial microsatellites and a technological payload to test a new separation system. The cluster includes the following satellites:

MOMENTUS X1 (El Camino Real) of the US company MOMENTUS Spaceis designed for technical demonstration of an innovative propulsion system. This satellite is the first world’s SC of the 16U сubesat format.

Satellite NSLSat-1, developed by the British Clyde Space for the Israeli company NSLComm, will demonstrate an innovative unfurlable antenna and new communication technologies in Ка-band.

Eight SC Lemur of the US company Spire Global Inc. will collect data on the movement of sea vessels and aircraft, as well as weather information on the basis of radio occultation measurements.

Three satellites, developed by the German producer of small-sized SC German Orbital Systems, one of which – JAISAT-1 – was produced for the Amateur Radio Society of Thailand, the other two – EXOCONNECT and D-Star ONE (LightSat) – will be used by the company to test new satellite systems of its own design.

SC Lucky-7 of the Czech company SkyFox Labs will demonstrate innovative solutions for the 1U cubesat platform. 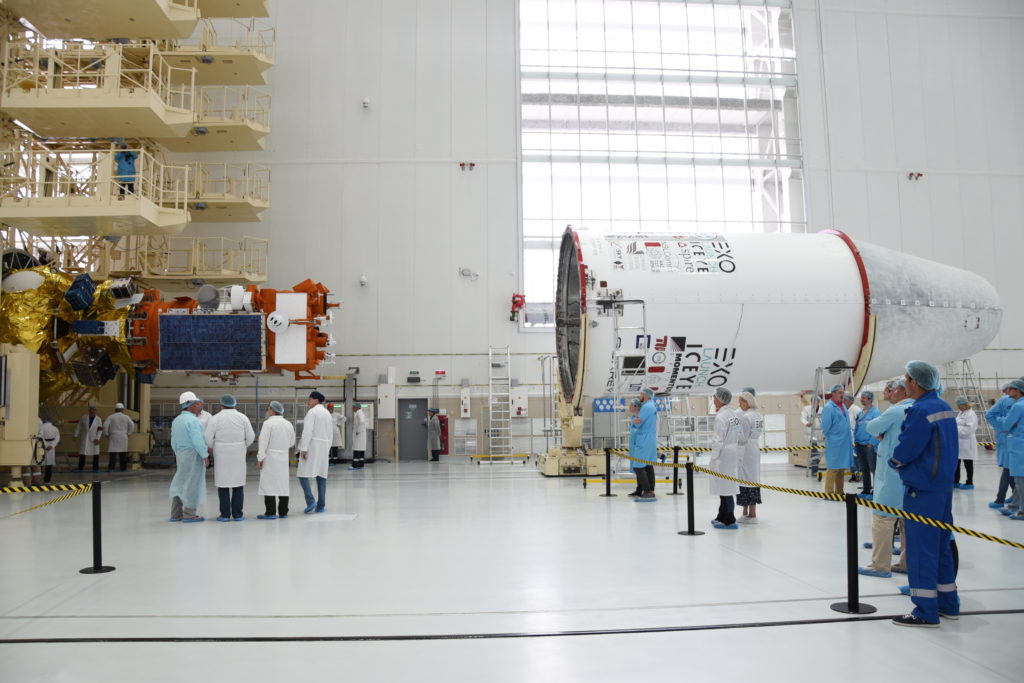 Apart from commercial SC of the сubesat type, the “Soyuz-2” launch vehicle will deliver a large number of foreign satellites, developed by universities:

The Royal Institute of Technology of Sweden is sending to space the SEAM-2.0 scientific SC to measure the Earth’s magnetic fields, and their colleagues from the French University of Montpellier are launching the MTCube SC, designed for the demonstration of space radiation monitoring technologies.

The University of Würzburg from Germany is launching SC SONATE for the demonstration of technologies and orbital processing of the SC’s platform support systems. The Technical University of Berlin is launching a cluster of 5 Beesat type SC, designed for the demonstration of technologies for SC’s positioning in space, as well as of intersatellite VHF communications. 4 out of 5 those SC have the dimension of 0.25U and are the smallest satellites in the cluster. The Technical University of Munichis launching SC MOVE-IIb to test the satellite platform. SC TTU-101, developed by the Tallinn University of Technology, will be launched into space to test a supersmall optical system and a high-speed system of data transmission in X-band. The “Equinoctial” Technological University of Ecuador will launch a research vehicle Ecuador – UTE for the observation of space weather and study of the Earth’s ionosphere.

All the satellites of the сubesat format will be launched in EXOpod transporter-launcher containers, developed by the Exolaunch GmbH company.

The cluster of small-sized SC of Exolaunch GmbH also includes two commercial microsatellites ICEYE, produced by the Finnish company ICEYE Oy, which are designed for the remote sensing of the Earth in X-band (radar sensing), and the CarboNIX technological payload for testing of a new soft separation system, produced by Exolaunch GmbH, which will be widely used for the adaptation of microsatellites for launch vehicles.

Besides, within the program of Roscosmos Space State Corporation on the development and launch of small satellites developed by Russian universities, three Russian research and education cubesats will be launched jointly with the “METEOR-M” No. 2-2 SC, i.e. “Socrates”, “VDNKH-80” and “AmurSat”.