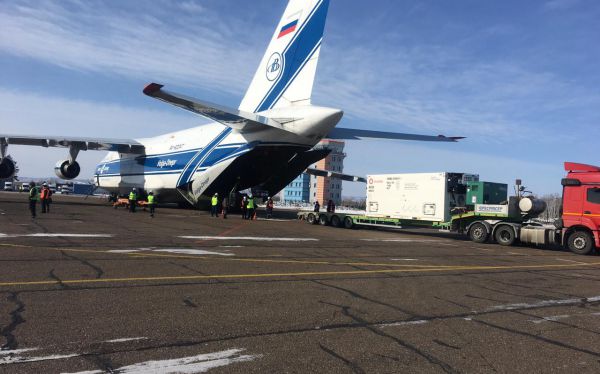 MOSCOW, February 26. – The 36 spacecraft of OneWeb - the company jointly owned by the UK Government and Bharti Global - arrived at Ignatievo airport (Blagoveshchensk) by an An-124-100 aircraft on Friday. The specialists of the Vostochny Space Center (a branch of TsENKI, part of Roscosmos) transported all 36 satellites to the Spaceport. On February 27, begins the preparation of the spacecraft for the launch scheduled for March 25 aboard the Soyuz-2.1 b launch vehicle with the Fregat upper stage.

Glavkosmos (a subsidiary of the State Space Corporation Roscosmos) provides the launch of the OneWeb spacecraft using the Soyuz launch vehicle under the contracts with the European launch services provider Arianespace and the Russian-French company Starsem in close cooperation with other Roscosmos enterprises: Progress Space Rocket Center, Lavochkin Association, and TsENKI.

Today the OneWeb low Earth orbit fleet of satellites has 110 spacecraft, and hundreds of others are to be launched. The upcoming launch should bring the number of OneWeb spacecraft in orbit to 146.