A new batch of 36 OneWeb satellites arrives at Baikonur 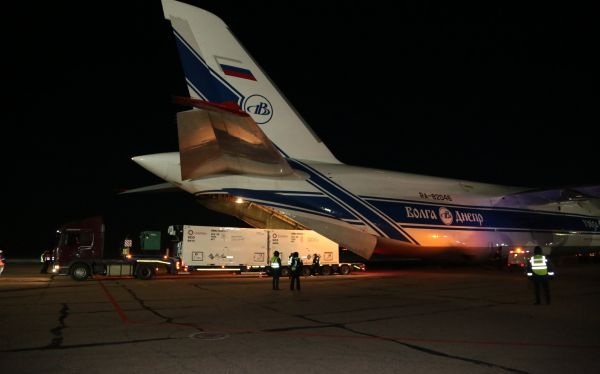 BAIKONUR, February 15. – A new batch of 36 OneWeb satellites was delivered to the airport Krainiy by an An-124-100 aircraft on Monday evening. The specialists of the Space Center Yuzhny (a branch of TsENKI, part of Roscosmos) transported the satellites to the cosmodrome. The joint technical team that combines the specialists of Roscosmos enterprises - Progress Space Rocket Center, Lavochkin Association, TsENKI, Russian Space Systems, Glavkosmos and those of the foreign customers, started preparing the spacecraft for the launch on board the Soyuz-2.1 b launch vehicle with the Fregat upper stage.

These activities are carried out under the contracts of Glavkosmos (a subsidiary of Roscosmos) with Arianespace, which operates launches of OneWeb spacecraft with the use of the Soyuz launch vehicles, and the company Starsem.

The launch operated by the European launch services provider Arianespace is scheduled for 22:41 UTC, March 5, 2022 (01:41 Moscow time, March 4) and it will be the fourteenth launch for OneWeb, the thirteen previous ones were carried out with the use of the Russian Soyuz launch vehicles from the Baikonur and Vostochny Cosmodromes and Europe’s Spaceport in French Guiana.

To date, the fleet of OneWeb satellites in the low Earth orbit consists of 428 spacecraft. The upcoming launch should bring the number of OneWeb spacecraft in orbit to 464.