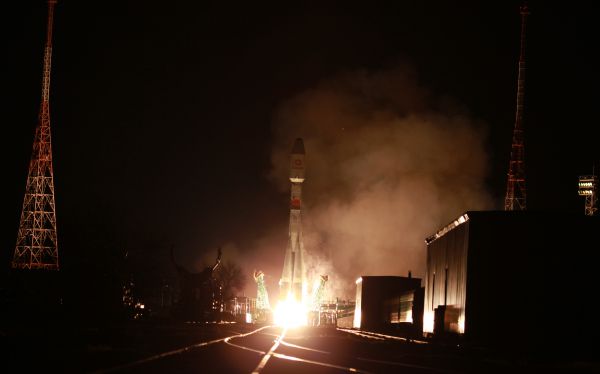 BAIKONUR, February 7 – A successful launch of 34 OneWeb satellites aboard the Soyuz-2.1 b launch vehicle with the Fregat upper stage was executed on Friday from the Baikonur Cosmodrome. The launch was carried out under the contract between Glavkosmos (part of the State Space Corporation Roscosmos) and Arianespace in close cooperation with other Roscosmos enterprises – Progress Space Rocket Center, Lavochkin Association, and TsENKI.

"I congratulate everyone on the successful launch. I hope that our foreign customers have appreciated the level of skills of the Russian specialists involved," said Dmitry Loskutov, Glavkosmos Director General. "Glavkosmos is satisfied with the launch and confirms its focus on further fruitful cooperation."

Dmitry Rogozin, Director General of Roscosmos, and the CEOs of Glavkosmos, Arianespace, Starsem and OneWeb observed the launch event.

The Fregat upper stage separation from the third stage was nominal. Within 3.5 hours, in accordance with the flight timeline, the satellites were separated from the upper stage nine times and put into their orbits.