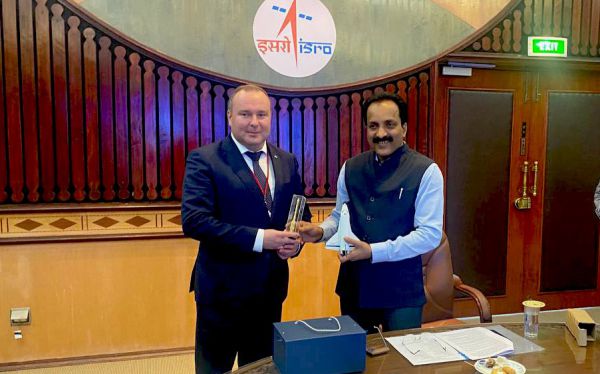 MOSCOW, September 9. – The Glavkosmos delegation (the company is part of Roscosmos) held a working meeting with the leadership of the Indian Space Research Organization (ISRO) at the Bengaluru Space Expo-2022, announced Dmitry Loskutov, Director General director of the company, following the results of the Glavkosmos work at the exhibition.

“At the meeting on September 6, the delegation of Glavkosmos and the leadership of ISRO headed by ISRO Chairman S. Somanath discussed prospects for the development and deepening of cooperation in projects of mutual interest,” he informed.

The CEO of Glavkosmos recognized the excellent organization of the exhibition and emphasized the interest of foreign visitors in the Russian exposition. “The Glavkosmos exhibition booth at Bengaluru Space Expo-2022, where we presented the capabilities of the Russian space industry, aroused keen interest among both space industry professionals and visitors interested in space cooperation between countries,” Loskutov said and noted that the Indian officials and ISRO leaders visited the Glavkosmos booth on the opening day of the exhibition on September 5. “We briefed them on the exposition and on the Glavkosmos activities in promotion of the Russian space industry products and services to global markets,” he said.

Glavkosmos is currently cooperating with ISRO within the Indian national human spaceflight program Gaganyaan. The company fulfilled contracts for the training of four Indian Air Force pilots to fly into space at the Gagarin Cosmonaut Training Center and the Institute of Biomedical Problems of the Russian Academy of Sciences. The systems and equipment for the Gaganyaan crewed space transportation spacecraft and individual equipment for future Indian cosmonauts (i.e. spacesuits, seats and coach liners produced by the Russian Scientific and Production Enterprise Zvezda) were supplied to India under the Glavkosmos contracts.

Glavkosmos took part in the 7th Bangalore Space Exhibition, which was held from 5 to 7 September at the Bangalore International Exhibition Center (Bangalore, India).