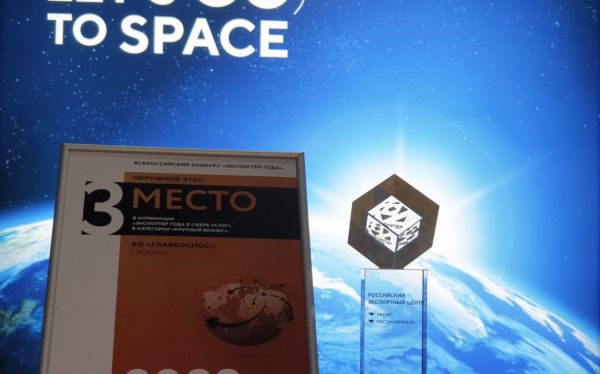 MOSCOW, October 13. – Glavkosmos JSC (part of Roscosmos) won the third place in the Central Federal District of Russia in the nomination of the Best Major Exporters in 2022 in the service sector according to the All-Russian Award Exporter of the Year. The company’s revenue by the results of 2021 increased almost one and a half times compared to 2020 and reached 13 billion rubles. The award ceremony took place on Thursday at the Moscow Central Entrepreneur's House on Pokrovka Street.

"The activities of Glavkosmos are aimed at promoting the products of the Russian rocket and space industry in global markets. Despite the current complexity of working abroad, we believe that in general we are coping with the tasks that are set before us and that are important for the country," Dmitry Loskutov said after the award ceremony. "Therefore, it is very encouraging that our contribution to the export capacity of the Russian space industry has been recognized at such a high level," he added.

In the information provided by Glavkosmos for evaluation by a competent jury were, among others, such items as the presence of an effective business development strategy for the near term, participation and organization of specialized international congress and exhibition events, the availability of its own trading websites with products placed there, the quoting and brand awareness of the company in foreign media and social networks. Of course, the organizers also took into account the financial indicators of Glavkosmos.

At the end of September, the Unified District Competition Commission of the All-Russian Award Exporter of the Year determined the best exporters of the Central Federal District in various nominations. In large business, LLC TRASCO (Moscow region) became the exporter of the year in the service sector, JSC Russian Railways Logistics (RZhD Logistika, Moscow) took the second place and JSC Glavkosmos won the third place.

The Decree of the Government of the Russian Federation No. 572 dated May 8, 2019 established the All-Russian Award Exporter of the Year. It is awarded to organizations and individual entrepreneurs who have achieved the greatest success in exporting non-primary non-energy goods, works, services, as well as the results of intellectual activity. There are two stages of the competition: at the level of federal districts and at the federal level. The award is presented at the annual International Export Forum Made in Russia.