Glavkosmos CEO congratulated the company's team on its 35th anniversary 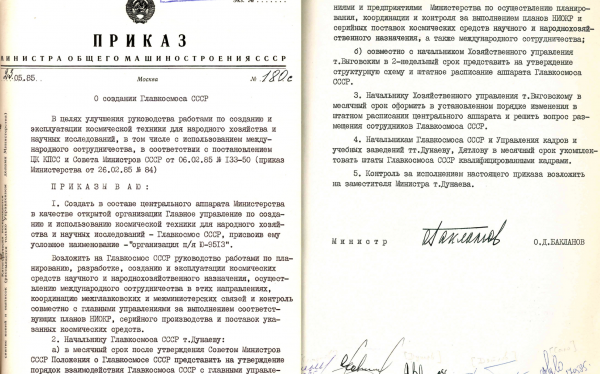 MOSCOW, May 23. – Glavkosmos (part of the State Space Corporation Roscosmos) celebrates this Saturday the 35th anniversary of its foundation. The company's CEO Dmitry Loskutov congratulated the organization's employees and summed up some of the results of the company’s work.

"As the head of the company, I am proud that our specialists quickly mobilized and switched to remote work in the face of the pandemic. It is their high self-discipline, responsibility and commitment that predetermined the effectiveness of seamless work in the face of new challenges - this can be called an important gift for the birthday of Glavkosmos,"he said. "Now with all due precautions, we are gradually returning to regular work".

Dmitry Loskutov noted that currently Glavkosmos has both the existing contracts and a healthy backlog for further cooperation with partners from Europe, Asia, North and South America, the Middle East, and Africa. He expressed confidence that this backlog "will be transformed into existing agreements and contracts in the near future".

"All this is the result of our joint work, achieved by the knowledge, professionalism and experience of each employee of the company. There is a tradition to wish new achievements for one’s birthday, so having this in mind in such a difficult year 2020, I would like to wish all of us new interesting projects, positive economic achievements, bold and ambitious tasks, good health and energy for new triumphs," he said in conclusion.

May 23 is the official birthday of Glavkosmos, JSC

The Central Committee of the Communist Party of the Soviet Union and the Council of Ministers of the USSR issued a special decree on February 6, 1985. The document, among other things, determined the establishment of a special organization, which would regulate the development of space technology in the interests of the national economy and scientific research by means of international cooperation.

To implement this resolution, on February 26, 1985, by the order of Oleg Baklanov, Minister of General Machine Building of the USSR, the task of creating such an organization was set. On May 23, 1985, Baklanov signed that order to create Glavkosmos of the USSR, and this date became the official birthday of the organization.