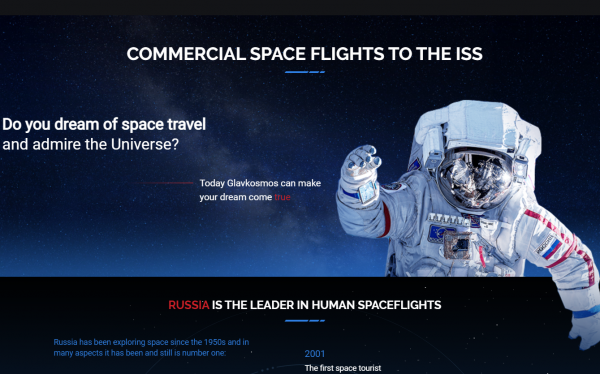 MOSCOW, June 8. - The official website of Glavkosmos JSC (part of the State Corporation Roscosmos) unveils the information for potential customers willing to go as tourists for a commercial flight to the International Space Station (ISS).

"Potential customers of commercial human space flights now can easily get information from the original source about how their flight to the International Space Station will be organized," said Dmitry Loskutov, Director General of Glavkosmos. "Prospective commercial participants of space flights will find out which spacecraft and rocket they will go on a space trip on, what tasks will be solved during their pre-flight training, what they will be able to do during their stay in space. And the most important thing is that they can easily contact our managers through our website, get feedback and additional information," he added.

The information about commercial flights to the ISS is available in Russian and English. It is divided into several blocks and should answer the most frequently asked questions. If there is a real interest in space travel, a potential tourist or his/her representative can contact for more detailed and specific information on the flight the Glavkosmos managers by phone or email.