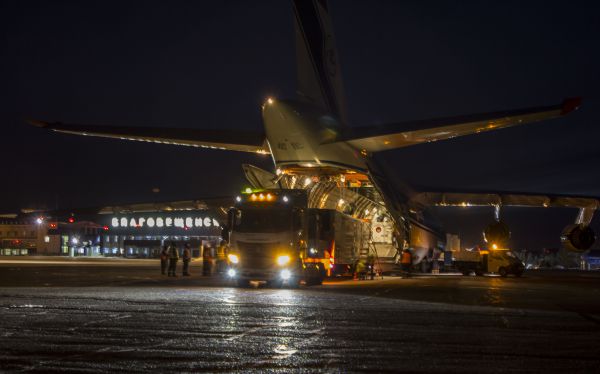 MOSCOW, November 19. – The spacecraft of the British company OneWeb arrived at Ignatievo airport (Blagoveshchensk) by an An-124-100 aircraft on Thursday. The specialists of the Vostochny Space Center (a branch of TsENKI) have already transported all 36 satellites to the Vostochny Spaceport. The spacecraft will be prepared there for the launch aboard the Soyuz-2.1b launch vehicle with the Fregat upper stage scheduled for December.

It will be the first fully commercial launch from Vostochny. Moreover, it will also be the first launch operated by Arianespace for OneWeb from this spaceport.

Glavkosmos (a subsidiary of the State Space Corporation Roscosmos) provides the launch of the OneWeb spacecraft using the Soyuz launch vehicle under the contracts with the French company Arianespace and the Russian-French company Starsem.

On November 2, two dispensers and ground support equipment for the OneWeb spacecraft arrived at Vostochny. From November 12 to December 1, the Fregat fueling activities are being in progress as scheduled. After that, it will be taken to the Spacecraft Assembly and Test Facility for Space Head Module assembling.

Currently, the OneWeb low Earth orbit fleet of satellites has 74 spacecraft, and hundreds of others are to be launched. The first six OneWeb satellites were launched on February 28, 2019 from the spaceport in Kourou (French Guiana) by Soyuz-ST with the Fregat upper stage. On February 7 and March 22, 2020, 34 satellites in each launch were injected into orbit from the Baikonur Cosmodrome by the Soyuz-2.1b launch vehicle with the Fregat upper stage. The upcoming launch should bring the number of OneWeb spacecraft in orbit to 110.