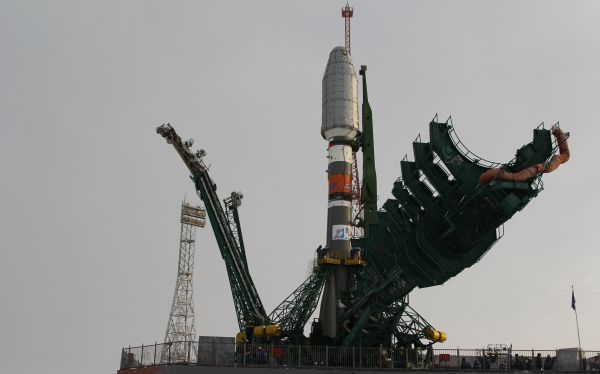 BAIKONUR, February 3. – The Soyuz-2.1b launch vehicle with the Fregat-M upper stage and 34 OneWeb communications satellites aboard has been transported from the Assembling and Testing Facility and installed at the Launch Complex, Site 31 of the Baikonur Cosmodrome.

The launch activities are carried out under the contract between Glavkosmos, JSC (a subsidiary of Roscosmos) with the French company Arianespace for the launch of OneWeb satellites. Specialists of the Russian rocket and space industry are performing the final technical operations. Pre-launch tests of Soyuz-2.1b systems are being conducted, and the interfaces between onboard and ground equipment are being checked.

The representatives of Roscosmos and Glavkosmos, as well as the authorized representatives of Arianespace and OneWeb, observed the transportation to the Launch Complex. "The Commission gave a positive conclusion and approved the measures for transporting the launch vehicle and its preparation for the upcoming launch. We are confident of the high professionalism of the Russian specialists involved and we are getting ready for the launch of Soyuz with OneWeb satellites aboard," said Dmitry Loskutov, Director General of Glavkosmos.