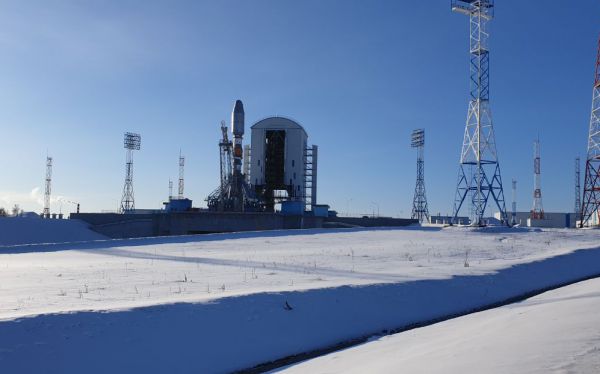 VOSTOCHNY, December 15. – On Tuesday, the Soyuz-2.1b launch vehicle with the Fregat upper stage and 36 OneWeb communications satellites aboard was rolled out from the Assembly and Test Facility and installed on the launch pad of the Vostochny Spaceport.

The pre-launch activities are carried out under the contract between Glavkosmos (a subsidiary of Roscosmos State Space Corporation) and the French company Arianespace for OneWeb launch. Specialists of the Russian rocket and space enterprises perform final operations. The pre-launch tests of Soyuz-2.1b systems are being conducted, and the interfaces between the on-board instruments and ground equipment are being checked.

It will be the first fully commercial launch from Vostochny. Moreover, it will also be the first launch operated by the European launch services provider Arianespace for OneWeb from this spaceport.

Currently, the OneWeb low Earth orbit fleet of satellites has 74 spacecraft, and hundreds of others are to be launched. The first six OneWeb satellites were launched on February 28, 2019 from the spaceport in Kourou (French Guiana) by the Soyuz-ST with the Fregat upper stage. On February 7 and March 22, 2020, 34 satellites in each launch were injected into orbit from the Baikonur Cosmodrome by the Soyuz-2.1b launch vehicle with the Fregat upper stage. The upcoming launch should bring the number of OneWeb spacecraft in orbit to 110.

OneWeb low Earth orbit satellites are designed to provide consumers on the ground with high-speed Internet directly through satellite communications.