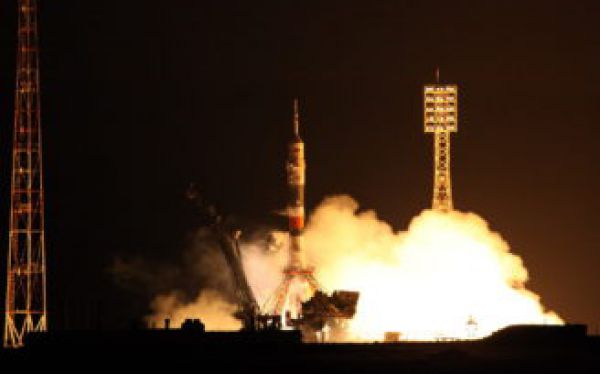 Soyuz-FG performed nominally at all the flight legs and 8 minutes 48 seconds after lift-off Soyuz MS-08 separated from the 3rd stage of the launcher and reached the artificial satellite orbit as scheduled. Then, the Main Operation Control Group (MOCG) of the ISS Russian Segment in the Flight Control Center took over the control of the spacecraft flight.

Soyuz MS-08 spacecraft will approach the ISS using a long two-day rendezvous profile. The docking is expected on 23 March 2018 at 22:41Moscow time. The rendezvous and docking with the Poisk Mini Research Module (MRM2) will be fully automatic though supervised by the MOCG experts and both crews in the spacecraft and at the ISS.

The launch event was attended by a delegation from the Kingdom of Bahrain. Taking the advantage of their visit to Baikonur, the guests met with Roscosmos delegation. The meeting was arranged by Glavkosmos. The delegations discussed training of the future Bahraini astronauts in the Gagarin Training Center (Roscosmos Corporation) for manned flights to the International Space Station (ISS), a visit to the Flight Control Center (Roscosmos Corporation) and to the Biomedical Institute of the Russian Science Academy.