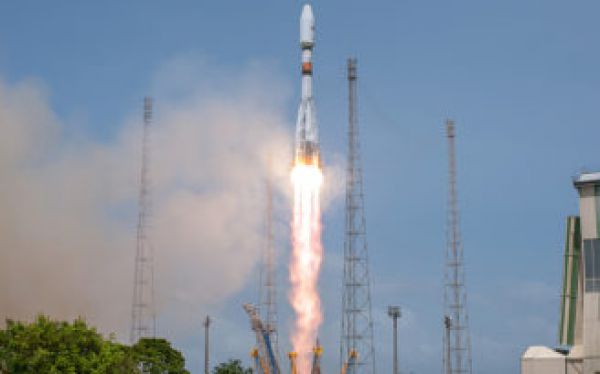 On 9 March 2018, at 20:10:06 Moscow time, a successful launch of a Russian Soyuz-ST-B rocket carrying four European telecommunication O3b satellites was executed from the Guiana Space Center (Kourou, French Guiana) as a culmination of the Arianespace VS18 launch campaign.

9 minutes 23 seconds after lift-off, the upper composite (a Fregat-MT upper stage with the four O3b satellites) successfully separated from the 3rd stage of the Soyuz-ST-B launcher. Fregat-MT then started up its flight mission to insert the satellites into their target orbit.

The flight program provided for three burns of Fregat-MT propulsion system (PS) to sequentially form a park orbit, a transfer orbit, and the first target orbit for injection of two satellites. Then, the fourth Fregat PS burn formed the second target orbit for deploying the other two satellites. The entire launch mission from the lift-off till separation of all the four satellites lasted 2 hours 22 minutes 51 seconds. Finally, with two more burns, Fregat-MT was delivered to a graveyard orbit.

The Soyuz-ST-B rocket was previously employed in three launches of O3b payloads from the Guiana Space Center in June 2013, July and December 2014. In each of the missions, the Russian launch vehicles orbited four satellites. The March 2018 mission of Soyuz-ST-B was number 4 in the O3b program and number 18 in the record of launches from the French Guiana.

Glavkosmos is the prime contract integrator of the Russian companies under the Soyuz in GSC Program and assures interaction with Arianespace.