The new launch of OneWeb satellites from Baikonur is a success 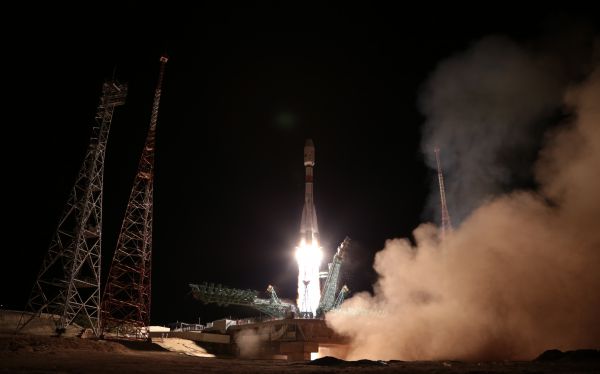 BAIKONUR, August 22. - A successful launch of 34 OneWeb satellites aboard the Soyuz-2.1b launch vehicle with the Fregat upper stage was executed on Saturday, August 21, at 22:13 UTC (Sunday, August 22, 01:13 Moscow time) from the Baikonur Cosmodrome. The launch of the spacecraft was carried out under the contracts of Glavkosmos (a subsidiary of Roscosmos) by the European launch services provider Arianespace (operates the launch of OneWeb spacecraft with the use of the Soyuz launch vehicle) and the company Starsem.

The launch was executed by the joint team, which combined the specialists of Roscosmos enterprises - Progress Space Rocket Center, Lavochkin Association, TsENKI, Russian Space Systems, Glavkosmos and those of the foreign customers.

The separation of the Fregat upper stage from the third stage was nominal. During almost three hours in accordance with the flight sequence, the spacecraft were separated from the upper stage nine times and injected into target orbits.

This launch became the ninth under the OneWeb program and the third performed from the Baikonur Cosmodrome.

The foreign customers of Glavkosmos have confirmed that the company has fully complied with its contractual obligations. The customer has acquired the signal from all the satellites.

OneWeb low Earth orbit satellites are designed to provide consumers on the ground with high-speed Internet. Today’s launch brought the number of OneWeb satellites in orbit to 288 and the company is planning to launch hundreds more.