The Soyuz-2.1b launch vehicle with 36 OneWeb satellites is placed on the launch table at Vostochny 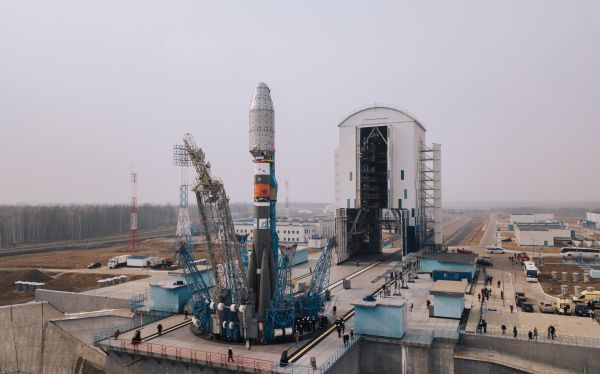 VOSTOCHNY, April 22. - The Soyuz-2.1b launch vehicle with the Fregat upper stage and 36 OneWeb communications satellites was rolled out from the Assembly and Test Facility. The launch vehicle was installed on the launch pad of the Vostochny Сosmodrome, the launch is scheduled for Monday, April 25, at 22:14 UTC (April 26, at 01:14 Moscow time).

Pre-launch activities are carried out under the contracts of Glavkosmos (a subsidiary of the State Space Corporation Roscosmos) with the European launch services provider Arianespace, which provides and operates the launch of OneWeb spacecraft with the use of the Soyuz launch vehicle, and the Russian-French company Starsem.

The work with the foreign customers is carried out by the representatives of other Roscosmos enterprises: Progress Space Rocket Center, Lavochkin Association, and TsENKI.

Now, the specialists at the spaceport are performing the final technical operations. The pre-launch tests of Soyuz-2.1b systems are being conducted, and the interfaces between the on-board instruments and ground equipment are being checked.

This launch will be the third fully commercial launch of spacecraft from Vostochny. The previous two launches were also for the OneWeb mission.

Now, the fleet of the OneWeb satellites in the low Earth orbit amounts to 146 spacecraft, and hundreds more are to be launched. The upcoming launch should bring the number of OneWeb spacecraft in orbit to 182.