TASS: Glavkosmos ends research into likely use of Russian equipment on Indian spacecraft 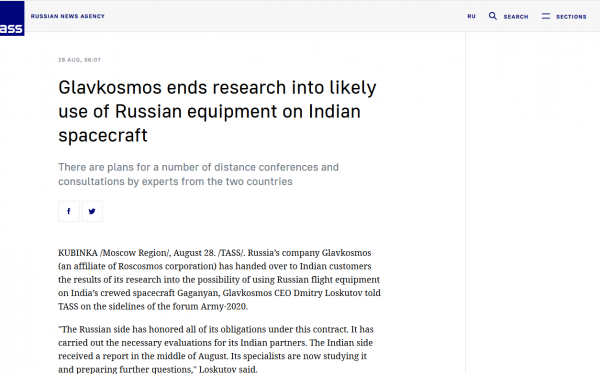 KUBINKA /Moscow Region/, August 28. /TASS/. Russia’s company Glavkosmos (an affiliate of Roscosmos corporation) has handed over to Indian customers the results of its research into the possibility of using Russian flight equipment on India’s crewed spacecraft Gaganyan, Glavkosmos CEO Dmitry Loskutov told TASS on the sidelines of the forum Army-2020.

"The Russian side has honored all of its obligations under this contract. It has carried out the necessary evaluations for its Indian partners. The Indian side received a report in the middle of August. Its specialists are now studying it and preparing further questions," Loskutov said.

There are plans for a number of distance conferences and consultations by experts from the two countries.

"Under the terms of the contract a group of Russian specialists was to make a trip to India for presenting their report and answering more questions their Indian counterparts might find appropriate to ask, but amid the novel coronavirus pandemic the presentation will have to be held in a distance conference mode. We are expecting a confirmation from the Indian side," Loskutov said.

The contract for examining the possibility of using Russian flight equipment in the life support and temperature control systems of the crewed spacecraft Gaganyan was concluded on October 25, 2019. Specialists from the space rocket corporation Energia participated in the project.

On July 1, 2019 Roscosmos said that Glavkosmos and the Human Space Flight Center under the Indian Space Research Organization concluded a contract for supporting the selection, medical examination and training of Indian astronauts.

In August 2018, India’s Prime Minister Narendra Modi said that his country would orbit the first space crew in 2022, the 75th year of independence. Before that two crewless spacecraft will be put in space. A group of four astronauts from India entered a course of instruction at the Gagarin Space Training Center in February 2020.