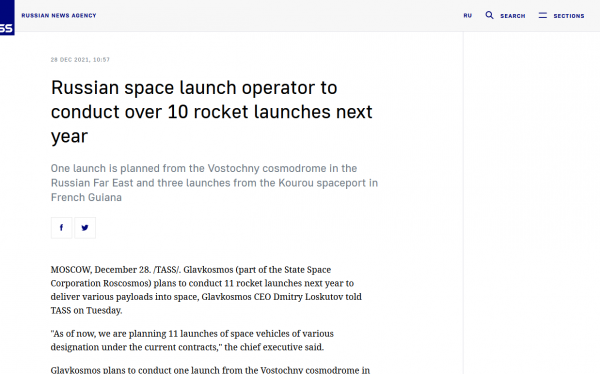 "As of now, we are planning 11 launches of space vehicles of various designation under the current contracts," the chief executive said.

Glavkosmos plans to conduct one launch from the Vostochny cosmodrome in the Russian Far East and three launches from the Kourou spaceport in French Guiana, Loskutov said.

"We are planning to conduct the larger part of seven launches from the Baikonur spaceport," the chief executive said.

The Glavkosmos chief earlier told TASS that seven launches of British OneWeb communications satellites were scheduled for 2022. The first launch was scheduled to take place from the Guiana space center (the Kourou cosmodrome) in February, he specified.