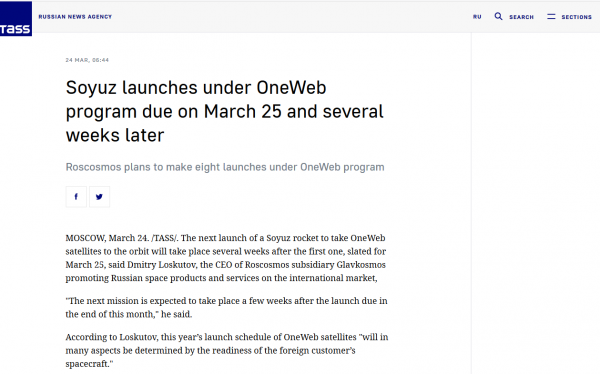 MOSCOW, March 24. /TASS/. The next launch of a Soyuz rocket to take OneWeb satellites to the orbit will take place several weeks after the first one, slated for March 25, said Dmitry Loskutov, the CEO of Roscosmos subsidiary Glavkosmos promoting Russian space products and services on the international market,

"The next mission is expected to take place a few weeks after the launch due in the end of this month," he said.

According to Loskutov, this year’s launch schedule of OneWeb satellites "will in many aspects be determined by the readiness of the foreign customer’s spacecraft."

A Soyuz-2.1b carrier rocket with OneWeb satellites is scheduled to blast off from the Vostochny space center in Russia’s Far East at 05:47 Moscow time on March 25. Roscosmos plans to make eight launches under the OneWeb program from the Baikonur, Vostochny and Kourou spaceports this year. The first six satellites were orbited by a Soyuz-ST carrier rocket from the Kourou launch facility in French Guiana on February 28, 2019. Another 34 satellites were delivered into outer space on February 7, 2020 and the same amount on March 21 from the Baikonur spaceport.

OneWeb satellites were launched from the Vostochny spaceport for the first time in December 2020. A total of 36 space vehicles were put into orbit. Overall, the UK company intends to deliver around 600 satellites into a near-Earth orbit.

OneWeb’s renewed agreement with the French Arianespace that acts as the launch operator stipulates the lift-off of 16 Russian Soyuz carrier rockets from the Kourou, Vostochny and Baikonur spaceports in 2020-2022. Each launch allows orbiting 34-36 OneWeb satellites.