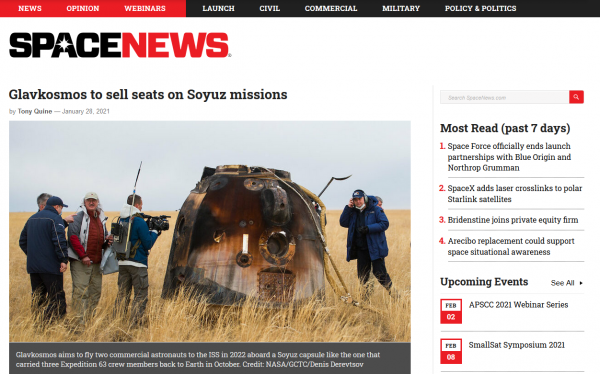 DOUGLAS, U.K. — Glavkosmos, the commercial arm of the Russian space agency Roscosmos, has announced its intent to enter the space tourism market, selling a minimum of four Soyuz seats to commercial astronauts through 2023.

Roscosmos has previously sold such seats through a long-standing relationship with American company Space Adventures. In December, Glavkosmos tweeted its plans to start selling seats, which a company spokesperson has since confirmed.

“We assume that each crewed Soyuz MS spacecraft intended solely for commercial spaceflight will have two seats for space tourists” with a professional astronaut occupying the third seat, Glavkosmos spokesman Evgenii Kolomeets told SpaceNews. “In 2022-2023, with a favorable combination of circumstances, we can count on four seats aboard the commercial spacecraft for space tourists.”

The first dedicated Glavkosmos flight should be Soyuz MS-23 in the fall of 2022 to the ISS, with a second flight expected some time in 2023. “Commercial spacecraft and launch vehicles for the 2022-2023 launch campaigns are being manufactured, and specific mission numbers are assigned to spacecraft only after they are included in the flight program,” Kolomeets said.

He added that Glavkosmos was looking into the possibility of also providing seats for commercial astronauts on the Russian government’s routine Soyuz missions to and from the International Space Station. The sale of extra seats on those missions is how space tourists had traditionally flown to the station.

Outside of these arrangements, Space Adventures and Roscosmos have already contracted for two dedicated commercial flights. The first is scheduled for December and the second, which includes an option of a spacewalk, is planned for June 2023. Assuming that these plans remain intact, there will be two dedicated Soyuz commercial missions in 2023.

Roscosmos and Glavkosmos are thought to have a pipeline of private clients separate from those negotiating with Space Adventures. In addition, countries such as Bahrain, Egypt and Turkey have been mentioned by Russian authorities as those who have shown interest in sending a citizen into space. Kolomeets said only that Glavkosmos is “negotiating with a number of potential customers.”