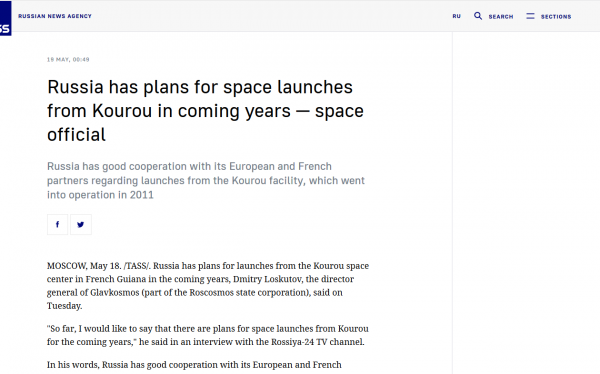 MOSCOW, May 18. /TASS/. Russia has plans for launches from the Kourou space center in French Guiana in the coming years, Dmitry Loskutov, the director general of Glavkosmos (part of the Roscosmos state corporation), said on Tuesday.

"So far, I would like to say that there are plans for space launches from Kourou for the coming years," he said in an interview with the Rossiya-24 TV channel.

In his words, Russia has good cooperation with its European and French partners regarding launches from the Kourou facility, which went into operation in 2011.

"Its estimated service period is 15 years, with 50 launches of the Soyuz-ST carrier rockets. Out of those 50, 25 have already taken place. When this period is over, Europeans will have to decide on whether the facility’s technological lifespan should be extended or not," Loskutov said.

At the moment, Russia is in talks on the issue with its partners.

"We expect to find a joint solution with Europeans on how to extend Kourou’s life, maybe in the interests of third states," he added.

Glavkosmos is a subsidiary of state corporation Roscosmos, its main goal is to promote products and services of Russian enterprises of the rocket and space industry to the international market and to manage complex international projects.