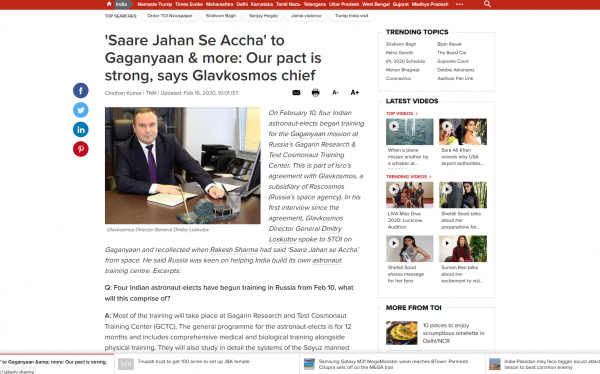 In his first interview since the agreement, Glavkosmos Director General Dmitry Loskutov spoke to STOI on Gaganyaan and recollected when Rakesh Sharma had said ‘Saare Jahan se Accha’ from space. He said Russia was keen on helping India build its own astronaut training centre. Excerpts:

Q: Four Indian astronaut-elects have begun training in Russia from Feb 10, what will this comprise of?

A: Most of the training will take place at Gagarin Research and Test Cosmonaut Training Center (GCTC). The general programme for the astronaut-elects is for 12 months and includes comprehensive medical and biological training alongside physical training. They will also study in detail the systems of the Soyuz manned spaceship.

Q: What will be some key things to make these pilots flight-ready?

Q: Also, is Glavkosmos providing any other technology for Gaganyaan?

A: Last October Glavkosmos and the Human Space Flight Centre of Isro signed a contract for the feasibility study of using Russian flight components in the Gaganyaan life support and thermal control systems. The contract is implemented with the participation of Rocket and Space Corporation Energia. So far, I can tell that we will fulfill our contractual obligations in full scope. Currently, we are negotiating various aspects of cooperation, and we will let you know when the final agreements are reached.

Q: Are you in talks for future Indian human missions? Will you or GCTC help build the astronaut training center in Challakere?

A: Glavkosmos is ready and looking forward to cooperation with India in future projects. If our partners from Isro consider it necessary, we will be ready to discuss issues related to assistance in constructing the Indian national cosmonaut training center, as well as questions related to training and preparation of its personnel.

Q: What does the Gaganyaan partnership mean in the context of a long-term human spaceflight alliance?

A: Russia and India share a long history of cooperation in space. The first Indian cosmonaut Rakesh Sharma flew aboard the Soviet Soyuz T-11 in 1984. His reply to a question about how India looks from space is known to the whole world: Saare Jahan se Accha – “Better than the whole world”.

Today we are working closely on Gaganyaan, which is important for both India and Russia; it can become a great example of our 21 st century cooperation. I know it for sure that we are just at the beginning of a long and glorious path to the stars and it will be much easier for our countries to walk this way together.